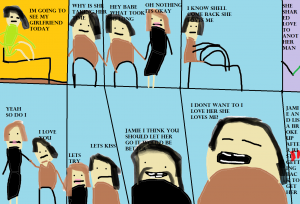 Jamie wakes up telling himself that he will be going to see his girlfriend today but feels very nervous about the get together, Jamie woke up got ready caught the bus to the coffee shop were jamie was meeting his girlfriend, Jamie got dropped off at the coffee shop and had been waiting for his girlfriend for like a good 30 minutes, Jamie girlfriend would always run on time, Jamies girlfriend finally got their and Jamie runs up to his girlfriend and asks her why she took so long, Jamies girlfriend told him that it doesnt matter, Jamie was trying to make conversation with his girlfriend sally but she was really not in the talking mood for some reason, Sallys tells jack she would be back any second, jamie says ok babe, Sally walked into the coffee store to see her crush robert who always weres a green shirt anywhere he goes because his favourite colour is green, Robert loves to hang around the coffee shop every day. Sally started chatting to robert and finding other things in common. about a good 15 minutes chat robert and sally discovered that they had lots and lots of things in common sally fell in love with robert and held hands. then Sally told robert she had to go sort something out with a friend and Robert said Ok sally meet up with you on Friday afternoon at the coffee shop. Jamies girlfriend finally got back to jamie and said that she was only their to get a coffee. Jamie says thats fine babe. Jamie told sally i love so, Sally gave a fake reply back to jamie saying so do i. Jamie kissed sally and sally told Jamie that it didnt work out and Jamies uncle who works at the coffee shop saw sally and robert holding hands. And told Jamie some bad news. Jamies uncle Frankie told Jamie to break up with his girlfriend because of what he saw at the coffee shop. Jamie was really upset about that and then Jamie and her girlfriend broke up. Jamie felt heartbroken for a good 5 days after that. but felt happier a good week later. The end

Liz (Warning very funny, some parts of the story might gross you out)